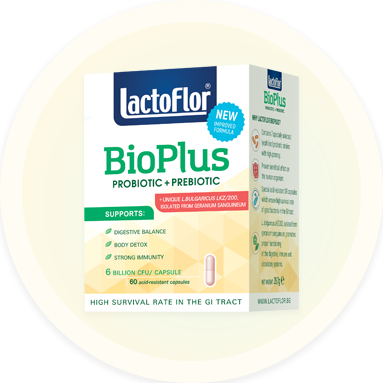 Balance Your Body
Needs Each Day

Have you thought about how your lifestyle effects your body? A number of factors of our daily environment may affect the contents of our intestinal micro-environment, some of which are strongly influenced by our daily diet, exposure to toxins from the environment, alcohol, smoking, and use of antibiotics or other medications. Other factors—including genetics—are unfortunately beyond our control.

Did you know that intestinal microbiota is an organ in and of itself? We need to take care of our microbiota because it plays a key role in our daily body functions and long-term health. Laсtoflor BioPlus is a Bulgarian synbiotic of a new generation which contains 7 strains of lactic acid bacteria (with high biological activity) and prebiotic (inulin) that improves digestion. The special Bulgarian strain, Lactobacillus bulgaricus LKZ-200, has been isolated from Geranium sanguineum. The roots of this herb contain polyphenolic compounds, which directly attack viruses by bonding to their envelope and blocking their aggressive mode of action. BioPlus restores and maintains the balance of intestinal microbiota by creating a favourable environment for the growth of good bacteria.

Lactoflor BioPlus Capsules is a product for daily care of gastrointestinal balance and support of the immune system.

Store out of reach of young children. Do not exceed the recommended daily dose. Do not use as a substitute for varied diet. Do not use after the expiry date indicated on the package. Keep in a dry place under 25°С. 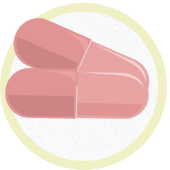 Synbiotics consist of various strains of probiotic bacteria and prebiotics—combined in a single chewable tablet, capsule, or sachet.

Synbiotics are gaining popularity due to the variety of bacteria stimulating the growth of different strains of beneficial microorganisms in the intestines—prebiotics then have great potential to change the balance of microbiota.

The combination of probiotic and prebiotic increases intake benefits by maintaining and restoring optimum balance of intestinal microbiota, improving metabolism, and decreasing fatigue and stress.

Inulin’s purpose is to help restore beneficial microbiota in the gastrointestinal tract, as well as maintain overall balance when managing chronic or systemic diseases.

Capsules to be taken with small amount of liquid after meals:

Probiotics are widely and successfully used to treat and prevent most diseases, especially those of the gastrointestinal tract, including diarrhoea and constipation of various aetiology, implications resulting from antibiotic treatment, food poisoning, acute intestinal infections, chronic colitis and enterocolitis, weakened immunity, bad breath, chemotherapy and radiation therapy implications, as well as other conditions. To this end, probiotics should comply with these requirements:

• High viability.
• Biological activity.
• Resistance to stomach pH.
• Belong to normal GIT inhabitants.
• Be resistant to antibiotics.
• Ability to suppress the growth of pathogenic bacteria and/or viruses.
• Restore and maintain the balance of gastrointestinal microbiota.


As products containing live microorganisms, probiotics also require specific conditions for storage and use. In order to be effective, probiotics should be taken separately from medication and food, at least 20-30 minutes before or after meals with a sufficient amount of water. ( See American Journal of Internal Medicine, NY, 2011.)

Probiotics and probiotic-based products have now taken their well-deserved place in health care, both as adjunctive therapy with antibiotic treatment and as agents used in treating a number of conditions, including IBS, IBD, polychemotherapy implications, antibiotic-associated diarrhoea syndrome, necrotizing enterocolitis, and travelers’ diarrhoea. These products are also used in the reconvalescent period after infectious and viral gastroenterocolitis. In addition, according to most recent publications, probiotic products aid in eradicating H. pylori (based on the biological principle of competition). .

Probiotics help digestion and aid in eliminating and excreting waste from the body and function in the synthesis of vitamins, as well as the inhibition of pathogenic microorganisms and conditional pathogens. Probiotics also facilitate the elimination of toxins. In general, the small intestine and colon host hundreds of types of bacteria which play an active role in building our self-image and health. Gastrointestinal microbiota is constantly subjected to environmental impact and coordinates the function of the immune and digestive systems. Gastrointestinal microbiota maintains the balance and internal environment in the intestines and suppresses the growth of pathogenic microorganisms and conditional pathogens. When the functioning of the GIT is impaired, the growth of pathogens and conditional pathogens is commonly observed, which leads to motility disorders and dysfunction in the processes of resorption and elimination in the GIT. This is where probiotics come into play—restoring biological equilibrium, as well as the balance of gastrointestinal microbiota. (See UK J of Gastroenterology, L., 2011, ch.4, p.256.)

In this context, we would like to share our clinical experience in the administration of probiotics. According to WHO (World Health Organization), irritable bowel syndrome (IBS) accounts for some 40% of the cases in gastroenterologists’ routine practice. (Ann J of Gastroenterology, WHO, Geneva, 2012) Administering probiotics in IBS patients has become an established standard in day-to-day medical practice. According to WHO (Ann J of Bact Deseases, WHO, Geneva, 2012), antibiotic-associated dysbacteriosis and diarrhea syndrome account for 25-28% of functional gastrointestinal disorders.

From 01 June to 01 October 2013, 87 patients with IBS were referred to our clinic. Single probiotic therapy was recommended to 70 patients. During follow-up visits, a clinical effect was reported in 60 patients, such results as improved self-image, discontinued bloating, lack of gas and flatulation, regular physiological rhythm in bowel movements. Double therapy was recommended to 17 patients—6 patients received probiotics and concentrated and standardised extracts (via gelatine capsules), and 11 patients received Simethiconе. A clinical effect (in the above indicators) was observed in 14 patients.

The data presented above support the routine administration of probiotics as a monotherapy and their administration in combination with other drugs influencing gastrointestinal motility and adsorption and evacuation of gas that is produced in larger amounts in specific functional and fermentation-associated GI disorders.

From 01 August to 01 October 2013, 23 patients with antibiotic-associated dysbacteriosis and diarrhoea syndrome were referred to our clinic. It was concluded that 12 of these patients had classic antibiotic-associated diarrhoea syndrome, resulting from antibiotic treatment for pulmonary pathology and upper respiratory tract pathology. These patients were treated with a probiotic monotherapy. An effect (in the above indicators) was reported in all 12 patients. The remaining 11 patients received combination therapy, including a probiotic product and Otilonium bromide. A clinical effect (in the above indicators) was observed in 10 of these patients. The above data convincingly demonstrate the effect of administering probiotic agents in routine clinical practice.

CONCLUSIONS: The above data convincingly demonstrate the effectiveness of probiotic products manufactured by Kendy Pharma in cases of:

1. IBS.
2. Dysbacteriosis.
3. Post-antibiotic diarrhoea.
4. Probiotics manufactured by Kendy Pharma are reliable products. There have been no reports of any adverse effects that could be associated with the intake of this type of probiotics.

Lactoflor BioPlus is a proprietary probiotic combination containing only natural ingredients, including two unique strains: Lactobacilus bulgaricus and Streptococcus thermophilus. The fibers (inulin) added to the combination of Lactoflor BioPlus cleanse the body and support digestive processes, as well as the activity of beneficial bacteria.

The most common health cases include:

Lactoflor BioPlus should be taken 1 to 3 months, depending on the patient’s condition and disorder.

The combination of lactic acid bacteria and fibers improves and conditions the functioning of the stomach, small intestines, and colon. It also improves peristalsis and leads to normalising the functional condition of the gastrointestinal tract.

Lactoflor BioPlus can be administered (at physician’s discretion) in post-operative periods for quicker recovery of the functioning of the small intestines and colon, which results in more rapid recovery and reduces post-operative complications.

The main properties of live organisms include feeding, breathing, movement, and reproduction, strongly influenced by technology and industrialisation. Those that are most affected include such high-risk groups as premature babies, infants, and children. Feeding and nutrition are among the first and most important interactions of the body with its environment.

The Joint FAO/WHO Expert Consultation on Evaluation of Health and Nutritional Properties of Probiotics (October 2001) defined probiotics as ‘live microorganisms which, when administered in adequate amounts, confer a health benefit on the [human] host’ (1). Experts’ consensus on this definition was based on the increasing number of scientific reports of health professionals, indicating that food with added live probiotics has beneficial effects on human health—in particular, live probiotics added to milk products have beneficial health effects on children and other high-risk populations.

Data resulting from scientific work have suggested that probiotics play an important role in immunological, digestive and respiratory functions, and could have a significant effect on the alleviation of infectious disease in children. Evidence in the research of health professionals prior to 2001 provoked more comprehensive studies of the effects of probiotics—studies which continue in order for data to be extrapulated to the entire population and separate high-risk groups. The most substantial research development was observed in the field of gastroenterology, with the effects of probiotics on the function of the GIT, the management of chronic GIT disease, and the function of the immune system mediated in the GIT. This research resulted in the creation of the guidelines of the World Gastroenterology Organisation in May 2008 (updated with current data in October 2011). The section entitled Probiotics, Prebiotics, and Evidence—the Global Picture (editions of the 2008/2011 guidelines) presents evidence concerning the genera, species, effects, number of references, and evidence level.

Lactoflor Kids is a synbiotic mixture which contains a prebiotic component (oligofructose) and seven probiotic types of bacteria. Four of these types (L. helveticus, L. acidophilus, L. bulgaricus, Str. thermophilus) belong to the genus of lactic acid bacteria (LAB), and the other three (B. bifidum, B. infantis, B. longum) belong to the Bifidobacterium genus, which also produce lactic acid.

The concept in developing the Lactoflor Kids combination is based on providing an adequate amount of bacterial cells of these seven probiotic species, which have their own characteristic health benefits and presence in the intestinal microbiota in children, as well as the prebiotic oligofructose. (Oligofructose is a natural nutrient which is not catabolised by enzyme systems of the human body but is catabolised by the enzyme systems of these seven probiotic species through the production of lactic acid and fermentation. This process reduces PH in the intestines and protects against contamination from potentially pathogenic bacteria.)

Oligofructose is a nutrient that can be absorbed by these seven probiotic species. This nutrient aids in the increase of the number of probiotic bacterial cells, thereby potentiating the predictable beneficial effects. Table 1 (below) shows the effects studied in various clinical conditions in children, the number of references, evidence level, and recommended daily dose for each probiotic species contained in Lactoflor Kids, including probiotic combinations. The order of probiotics presented below does not favour any of the species contained in Lactoflor Kids. The data in Table 1 (below) are based on the 2008/2011 guidelines of the World Gastroenterology Organisation.

Lactoflor Kids is a reliable synbiotic with a predictable beneficial effect on preserving children’s health in:

Health benefits can also be expected in:

Dose and use recommended by the manufacturer:
Dilute one sachet in lukewarm water, milk, or juice. Take as follows: 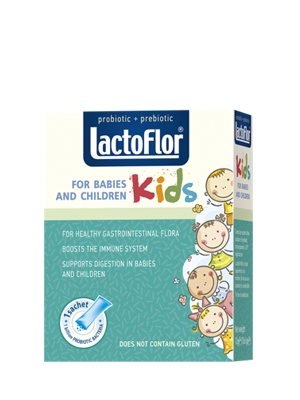 Specifically for Babies and Children - for Healthy Bellies and Strong Immunity 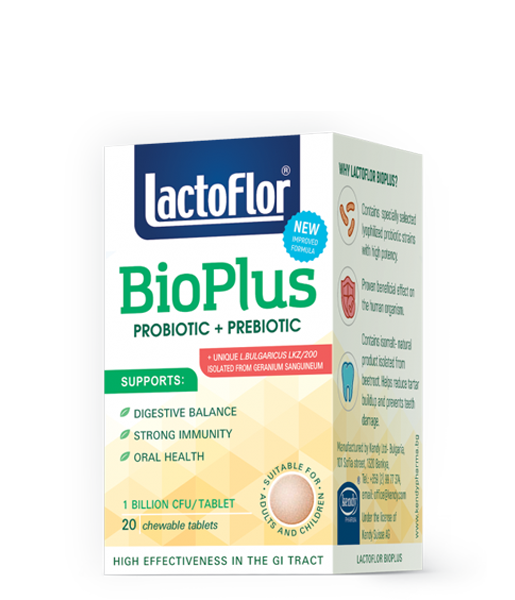 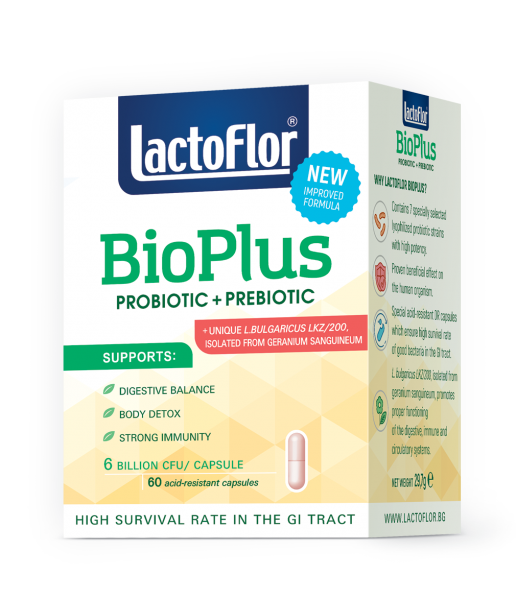 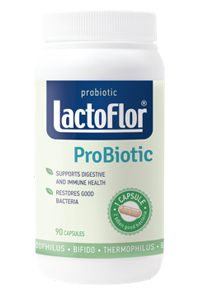 For Better Health, Energy, and Resilience against Infection

Supports the functioning of gastric and intestinal flora impaired by intestinal infections and antibiotic treatment and improves the immune system.

An Effective Solution against Diarrhoea

Lactoflor Enteric Ecol is a probiotic product containing Saccharomyces boulardii (microorganisms which stops diarrhea in a natural way), as well as lactic acid bacteria (which restore the functions of intestinal flora). 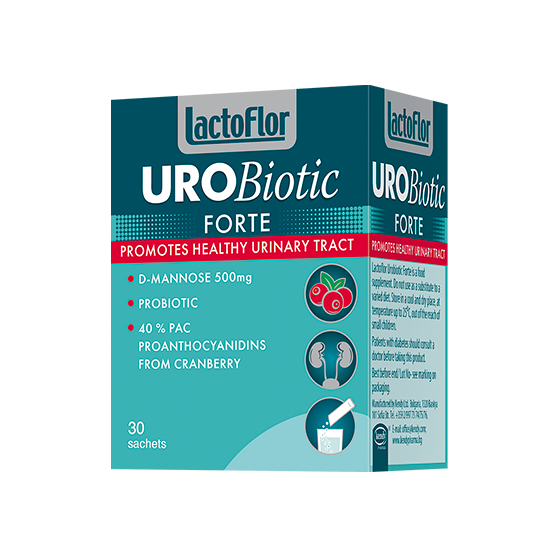 Lactoflor Urobiotic is a powerful formula for managing and preventing infection, with three active ingredients which contribute to normal functioning of the urinary tract.

Lactoflor Fibers is a natural product which supports normal bowel function, increases frequency of bowel movement, and detoxicates the body. 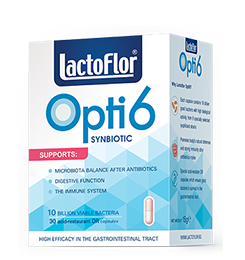 For the digestive system